Solo exhibition at the Sanatorium gallery, 2014

Ludovic bernhardt’s solo exhibition Drones, pills & yantras, aimed to draw attention to the post-industrial society’s some of the visual rituals. Medicines and pills packaging, military codes, fictional maps, yantra diagrams and mandalas, and so on, are used as signs which infiltrate bio-politically our daily life. Bernhardt mentions that “my aim is to combine various everyday objects and signs which frame politically the life of the ‘one dimensional man’. In the exhibition, he considers these pieces as ‘psycho-objects’ by using a variety of mediums, light installation, soap boxes, pseudo-mystical posters. According to the artist, one of the main important problematic which underlie the artworks is the issue of how an ultra-protective environment can be connected with the political reality.

The pieces exhibited were very created under the strong influence and spirit of the books theory of the drone (Grégoire Chamayou, 2013), Testo junkie (Beatriz Preciado, 2008) and the marxist book: wars of the global empire (Alain Joxe, 2013)

The pencil drawing represents the original 1st presentation page of the Sigmund Freud book "Civilization and its discontents". 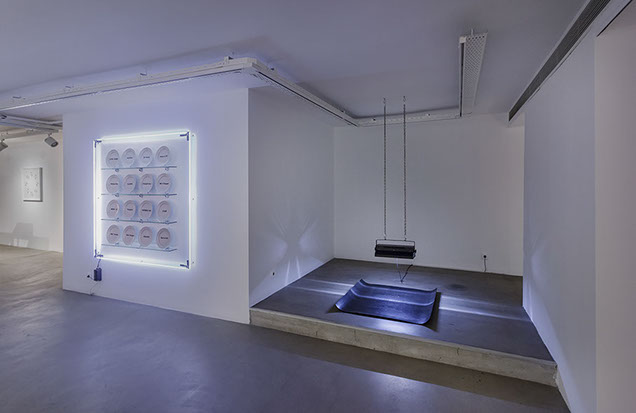 STROBFREUD (Civilization and Its Discontents)

Installation: Strobe, chains, drawing with graphite on a piece of rubber

Drawing of the original frontispiece of the Freud’s “Civilization and Its Discontents » combined with a strobe light.

This book, essential understand the irrational violence which shook Europe in 20th century, is subjected to the strong white light of the strobe, which makes it a cold analysis of a double-discontent: The discontent of the civilization that Freud studied in this book and the discontent of the failed reading of the book which could have guided the international political decisions of a civilisation subjected to the “death drive”. 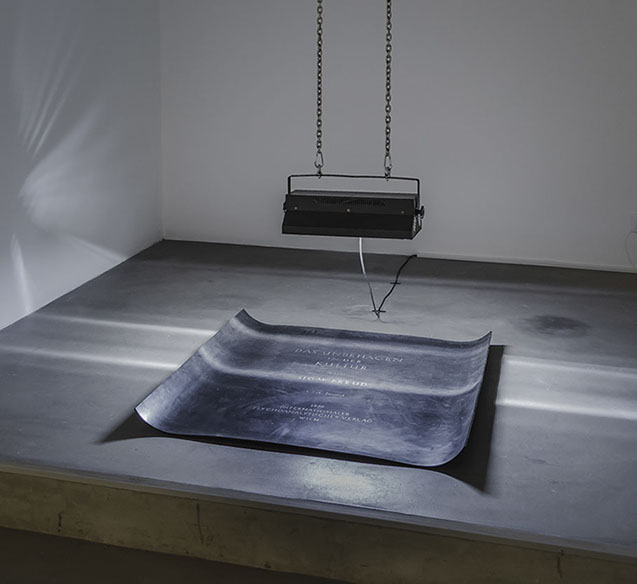 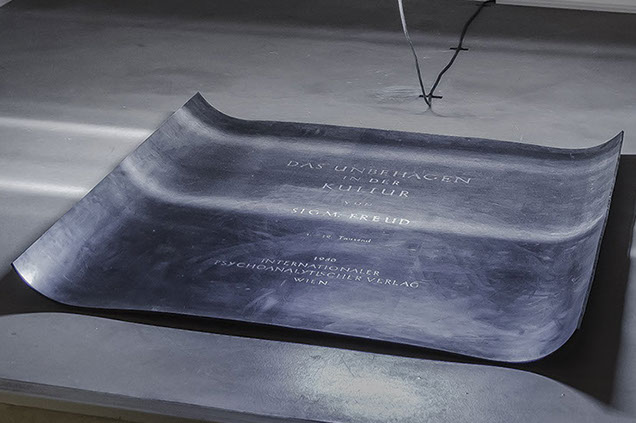 16 drones names applied on 16 standard domestic plates. The drones, unmanned aerial vehicles mostly used by the US army (and numerous other countries) during Middle East wars, became the hi-tech tools of a new barbarian Western remote-controlled domination, acting dangerously out of the conventional war rights. Used as surveillance, man hunt and remote killing machine tools, their coded names are, in this piece, confronted with the domestic and mundane identity of the plates, here showed as pure decorative objects: Both evocation of a globalised war imperialism and expression of private domestic banality. This series is based on the reading of the book “Theory of the Drone”, written by Grégoire Chamayou (2013) who analyses the recent transformation of wars leaded by the USA. 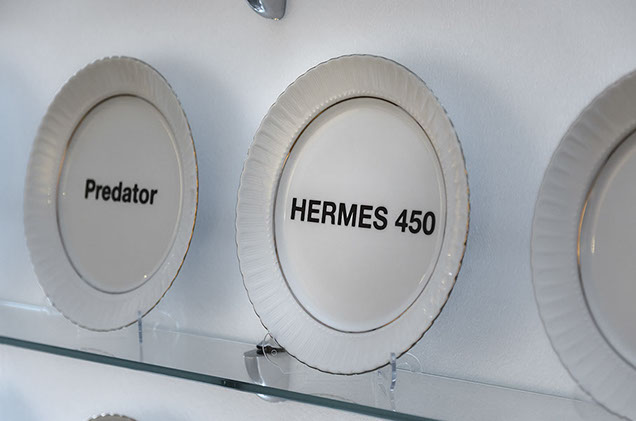 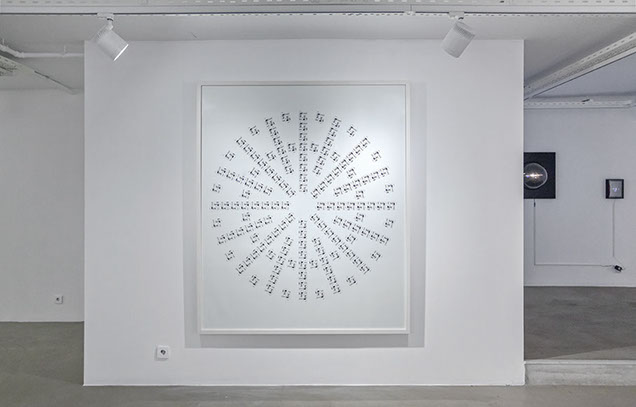 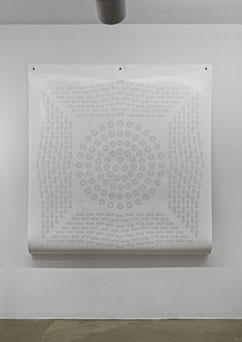 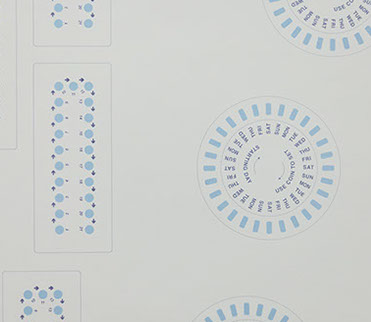 Meditation diagram composed of blister-packs of birth control pills. The industrial pharmacopoeia creating the emancipated and achieved femininity of our post-Fordist society is represented by a meditative diagram, a techno-mystical graphic medium. This series is linked to the book ‘Testo Junky’ (2003) written by Beatriz Preciado.

Meditation wheel composed of antidepressant drugs boxes. Prozac is a drug used to treat major depressive disorder, obsessive-compulsive disorder, panic disorder, and premenstrual dysphoric. From 2001 to 2009, 34 million people received a prescription of this medicine, as a part of a huge social bio-control. Industrialised pharmacopeia constructs the contemporary psyche of people suffering from depression, by subjecting a portion of the population to “magic wheel” chemistry.

Ritalin is a drug used to treat attention deficit hyperactivity disorder in children. Industrialised pharmacopoeia constructs the contemporary psyche of post-industrial bio-children, who, therefore, are subject to the “magic wheel” of medicinal chemistry and drug manufacturing. 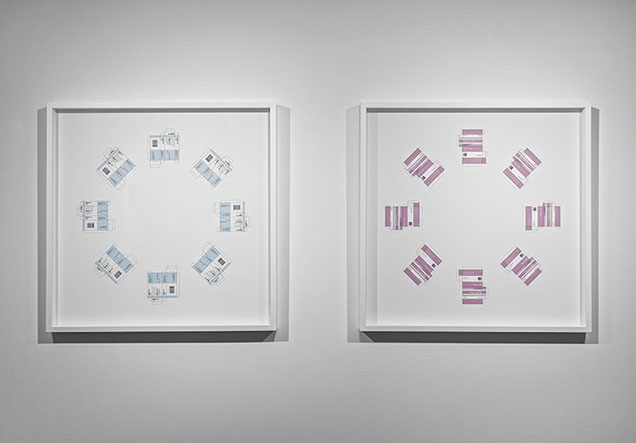 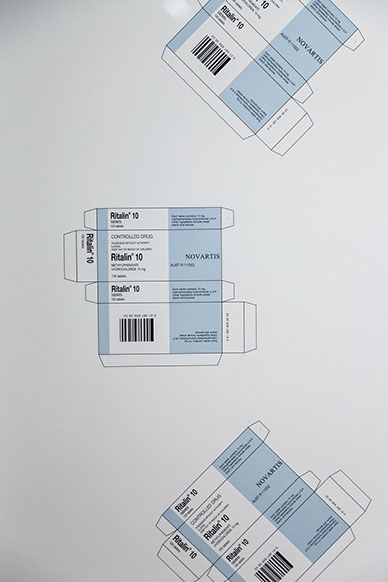 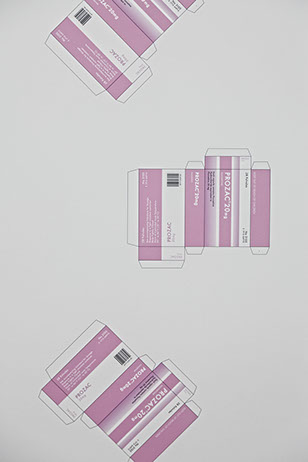 Four Tibetan lakes are depicted as mapped territories with precise borders whereas they belong to a natural register with fluctuating borders due to their liquid nature. 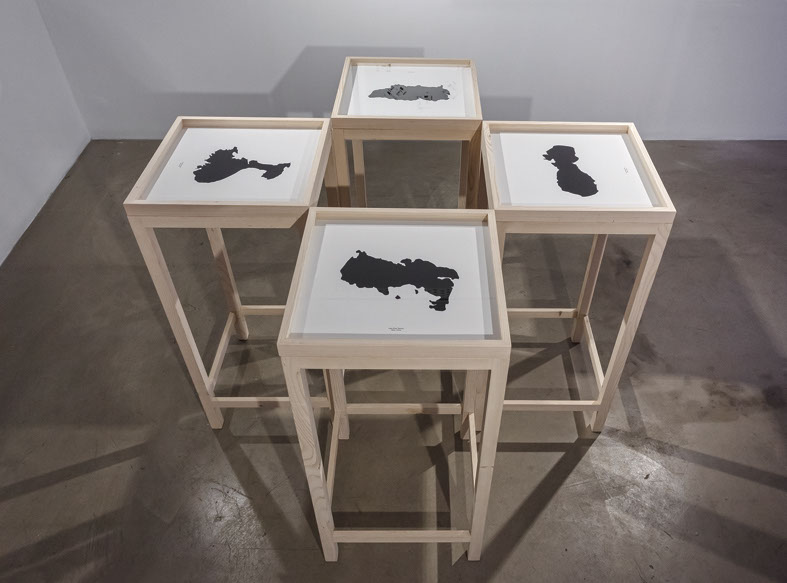 This piece, distributed to the visitors, can be read both ways: as a medal and/or a hot-air balloon, depending on the direction we take the cards. Medals or hot-air balloons, heavy or light, terrestrial or aerial; the motif is neutral and does not specify any hierarchy or distinction. 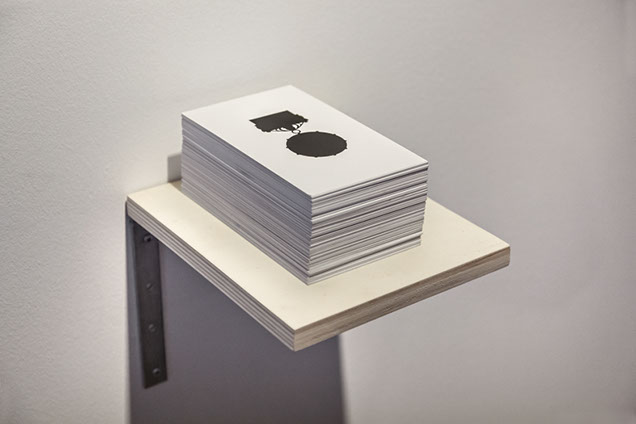 Recorded by a US hunting drone in Afghanistan and later diffused on the Internet, this video is projected on a wall composed of 6 pink liquid soap bottles. In this installation, the “eye-machine”, imperialistic weapon that has become widespread, is associated with a domestic, mundane and hygienic object. 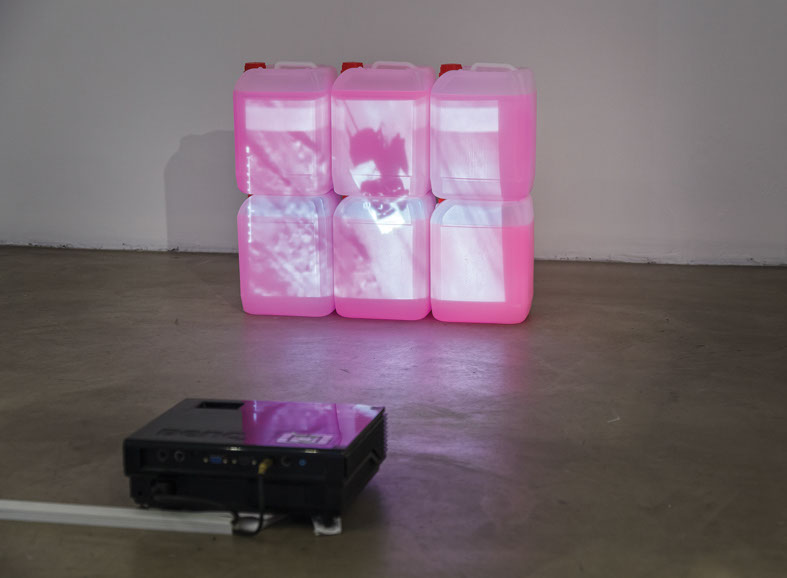 MIRROR OF THE REVOLTS #1

The dates, locations and geographical coordinates of three of the most recent and significant revolts that happened in 2014 are engraved on metal plaques fixed under each shelf.

We are going to enter a new era of « time of riots » (Badiou). These revolts arise as an inversion of the society, ruled by so-called the spectacular democracies, which look ‘stable’ and ‘resigned’ on the surface.

This piece proposes a reversed reading of right/left and up/down: mirrored reversal of the « reality ». These plaques are a discrete celebration.

Among the revolts emerging all over the world every week, (whose the number is rising up since a decade) these three revolts were chosen as symptoms of a more conservative Europe, witnessing the rise of repression and intolerance: Rising of far right wing / retention camps for migrants / repression of the poverty and the economy of survival.

Several protesters were arrested during violent demonstrations against an annual ball in the famous Vienna’s imperial Hofburg palace that traditionally draws far right-wing figures. 6,000 demonstrators took to the streets of the Austrian capital to protest against the so-called Academics’ Ball, part of the annual Viennese ball season, which was hosted by the far-right Freedom Party. The organisation “Jetzt Zeichen Setzen!” (Take a Stand Now), which campaigns for remembrance of victims of Nazism, published an open letter against the ball signed by six Holocaust survivors. “As survivors of the Nazi era, we are stunned that the Hofburg, which belongs to the republic, is still opening its doors to representatives of extreme-right organisations from Austria and Europe,” it said. Nazi Germany in 1938 annexed Austria, whose 200 000-strong Jewish population was wiped out in the Holocaust.

After the revolts and fire in 2008 in the detention camp of Vincennes near Paris, a new rebellion appeared in February 14 : it proves the deplorable and inhuman condition of detention of those people inside camps becoming European rules of migratory fluxes administration.

The Athens University of Economics and Business, one of Greece’s leading educational institutions, has been shut down on the orders of the university’s senate following escalating clashes between police and illegal street vendors who sell their wares on the sidewalk outside the Patission Street campus. Perfect symbol of the clash between academic economics institutions, and the survival economic behaviour of the poverty. 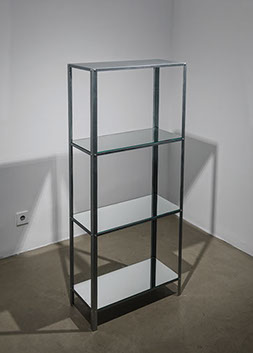 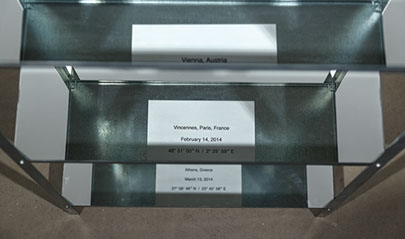 MIRROR OF THE REVOLTS #2

The dates, locations and geographical coordinates of the most recent and significant European revolts are engraved on metal plaques in this exhibition. But the display of the information is inversed. This one is the very recent plaque celebrating the Madrid “dignity march”. On 22nd of March tens of thousands citizens marched against the austerity and impotent Spanish government. 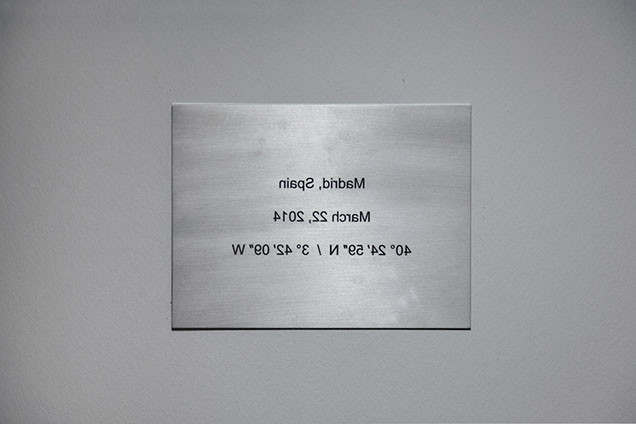 Painting made from a satellite photograph of the North and South Korea. The three chromatic layers are discretely shifted. The two brother countries are separated by a frontier and two politico-ideological systems totally opposed to each other. This piece is a cartographic representation of schizophrenic radical politics. 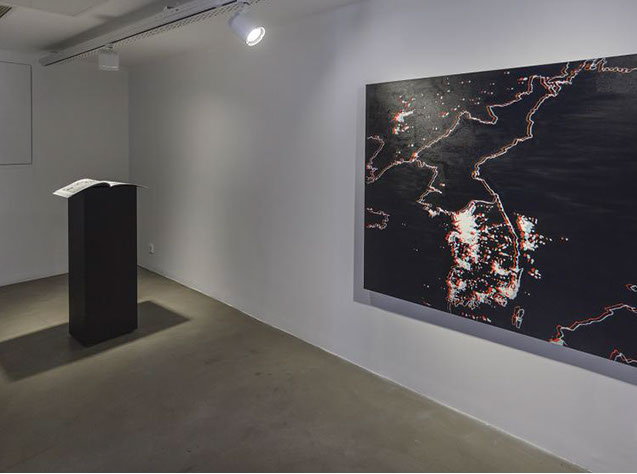 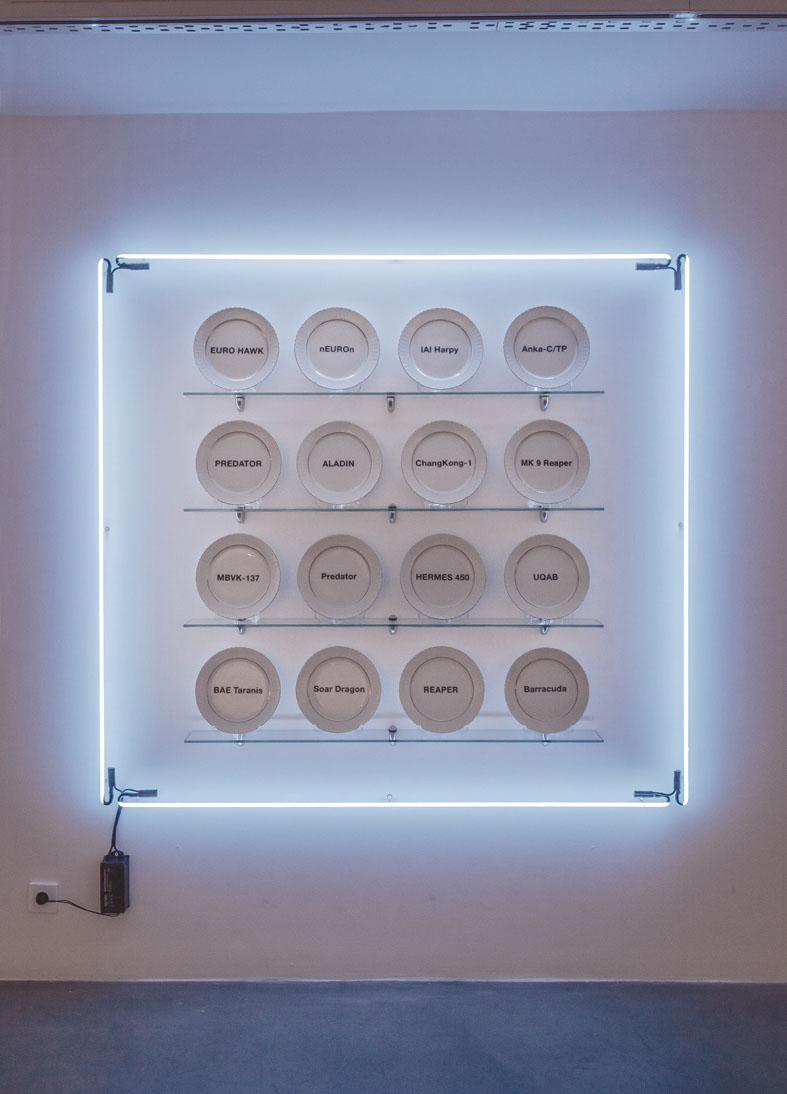